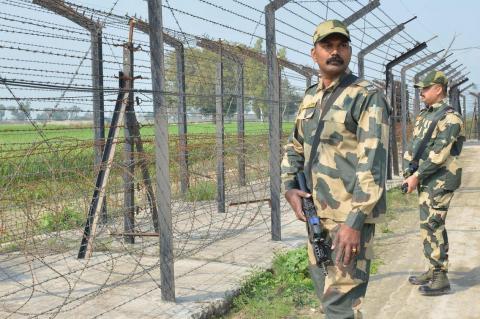 The Line of Control (LoC) dividing the erstwhile state of Jammu and Kashmir into India and Pakistan symbolizes decades of painful history. Now it is once again turning into a battleground between the two nuclear-armed neighbors.

The large population living on both sides of the divide continue living on the edge amid one of the heaviest military presences in the world.

But the sight of villages surrounded by military barracks, people huddled in underground bunkers, and the sounds of artillery fire and helicopters buzzing overhead make the serene surroundings seem lethal.

Sheep graze over the heavily mined boundary. Shepherds sometimes accidentally cross it, oblivious to its contours, only to be shelled by Indian or Pakistani soldiers, or detained.

From the city of Muzaffarabad to Neelam Valley, a distance of 102 km (63 mi), the calm of the serene surroundings is punctured with occasional gunfire. The local trees have taken the brunt of mortar shelling.
Speculations remain rife that tensions willd further escalate after New Delhi revoked the special status of Indian-administered Kashmir this August and released new maps showing the Pakistani side as its own.

The 5-km (3-mi) belt on either side of the LoC is a no-go area. No one can enter this strip without special permission.

Originally, the LoC was meant to be temporary, with plans for a referendum that would allow Kashmiris on either side to choose whether to join India or Pakistan. That vote never happened, and after decades of fighting,...