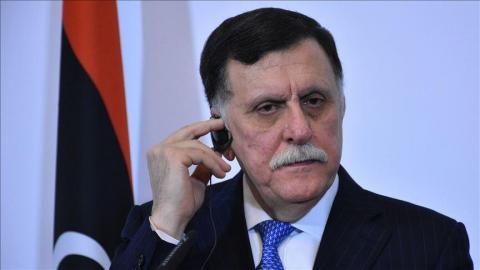 Libya's UN-recognized Government of National Accord (GNA) on Dec. 29 hit back at social media allegations on the presence of "Syrian elements" in the military headquarters in the capital.

According to a statement by Prime Minister Fayez Al-Sarraj's office, the reports -- issued by social media accounts affiliated with warlord Khalifa Haftar, commanding eastern forces opposing the GNA -- suggesting a Syrian presence in the capital Tripoli do not reflect the truth.

The statement said such baseless reports are nothing but smear campaigns targeting the UN-recognized government of the war-weary country.
Meanwhile, Libya's national oil company said on Dec. 28 it may face closure because of clashes close to its refinery in the country's western port.

The NOC said in a statement that three bombs hit close to its oil storage tanks in the last 48 hours in the western Zawiya port.

Libya's largest functioning refinery in Zawiya is located around 49 kilometers (30 miles) from the capital, Tripoli.

Since the ouster and death of ruler Muammar Gaddafi in 2011, two seats of power have emerged in Libya: one in eastern Libya supported mainly by Egypt and the United Arab Emirates, and the GNA in Tripoli, which enjoys UN and international recognition.