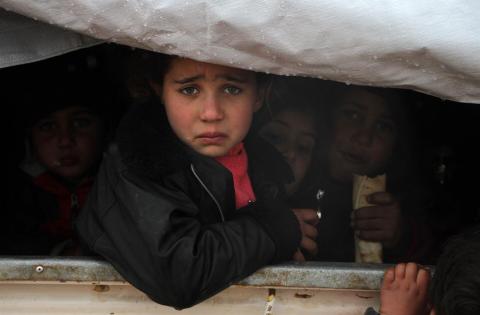 The European Union on Dec. 29 called on Syria's regime and its allies to halt "indiscriminate" military attacks on civilians in the country's northwest, where an intensifying bombardment by Damascus and Russian forces has displaced tens of thousands.

Civilians have streamed out of affected areas of jihadist-dominated Idlib province in recent weeks to escape heightened attacks on the southern edge of the final major opposition-held pocket of Syria, eight years into the country's devastating war.

"The escalation of violence in the Northwest of Syria by the Syrian regime and its allies must cease," the EU said in a statement by spokesperson for European Foreign Minister Josep Borrell, which said airstrikes and shelling had led to "countless civilian deaths".

"All parties have the obligation to protect civilians. The regime and its allies must cease indiscriminate military attacks and respect international humanitarian law," the statement said.

Violence has intensified since mid-December despite an August ceasefire deal and international calls for a de-escalation.

More than 235,000 people fled the area between December 12 and 25, mostly from the beleaguered city of Maaret al-Numan, according to the United Nations' humanitarian coordination agency OCHA.

The EU called for urgent unhindered humanitarian access to the three million civilians thought to be living in Idlib province.

It acknowledged that "terrorist groups" were operating in the region, but stressed that combating these networks "does not permit the undermining of international humanitarian law or the targeting of civilians".

The Idlib region is dominated by the country's former Al-Qaeda...

Turkey should not be left alone on refugee issue: UNHCR representative