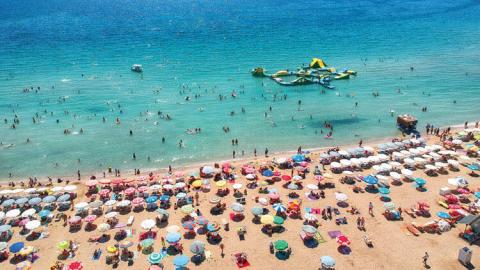 The number of foreigners visiting Turkey jumped 14.3 percent on a yearly basis between January and November, data from the Culture and Tourism Ministry have shown.

Over the past 11 months, a total of 42.9 million foreign holidaymakers entered the country, the ministry said on Dec. 30.

As far as the breakdown by country of origin is concerned, Russians topped the list with 6.9 million visitors or a16 percent share in total foreign tourist arrivals, followed by Germans with 11.3 percent (4.8 million visitors) and Britons with 5.8 percent (2.5 million).

In January-November this year, 2.48 million Bulgarian nationals spent the holiday in Turkey, accounting for some 5.8 percent of total foreign tourists, while Iranians captured the fifth spot with 1.97 million, or 4.6 percent, in total.

Data from the ministry also revealed that the Mediterranean resort city of Antalya was the top tourist draw in the country. It attracted around 14.4 million foreign holidaymakers - 33.7 percent of all visitors - in the first 11 months of the year.

Istanbul was the second most popular destination with foreign tourists. A total of 13.8 million foreign nationals visited the mega city in January-November.

The northwestern province of Edirne, which borders both Bulgaria and Greece, saw the third highest number of foreigners with 4 million, or 9.4 percent, of all visits.