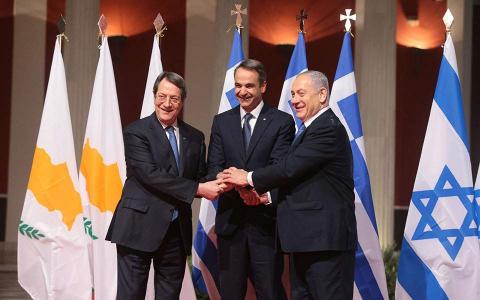 Greece, Israel and Cyprus have signed a deal for an undersea pipeline designed to carry gas from offshore deposits in the southeastern Mediterranean to continental Europe.
The deal was signed during a ceremony at Zappeion Hall by the three countries' energy ministers, Costis Hatzidakis, Yiorgos Lakkotrypis and Yuval Steinitz.
It was attended by Greek Prime Minister Kyriakos Mitsotakis, Cyprus President Nicos Anastasiades and Israel Prime Minister Benjamin Netanyahu.
The 1,900-kilometer EastMed Pipeline is intended to provide an alternative gas source for Europe which now mainly relies on supplies from Russia and the Caucasus region.