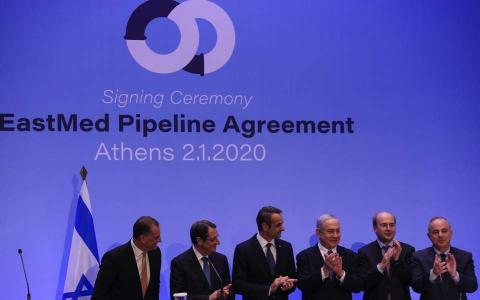 Greece, Israel and Cyprus signed a deal Thursday to build an undersea pipeline to carry gas from new offshore deposits in the southeastern Mediterranean to continental Europe.
The 1,900-kilometer (1,300-mile) EastMed pipeline is intended to provide an alternative gas source for energy-hungry Europe, which is largely dependent on supplies from Russia and the Caucasus region.
Greek Prime Minister Kyriakos Mitsotakis, who attended the signing ceremony with Israeli Prime Minister Benjamin Netanyahu and Cypriot President Nicos Anastasiades, said the pipeline will offer Europe "better flexibility and independence in its energy sources."
The pipeline would run from Israel's Levantine Basin offshore gas reserves to Cyprus, the Greek island of Crete and the Greek mainland. An overland pipeline to northwestern Greece and another planned undersea pipeline would carry the gas to...