Looking Back at 2019: Year of Mass Protests Across Balkans 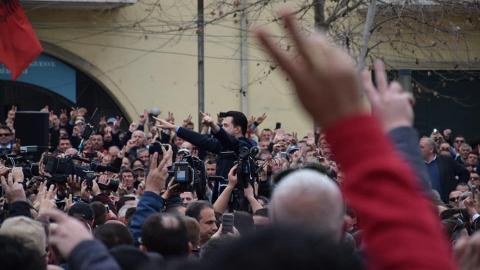 Serbian citizens who have been protesting weekly against Vucic's regime stormed the building of the Serbian national broadcaster RTS on March 16. Photo: BIRN.

Serbia's "One of 5 Million" movement emerged in the wake of a brutal assault on an opposition politician late in 2018, and grew into what at one point looked like a serious challenge to the grip on power of President Aleksandar Vucic and his ruling Serbian Progressive Party.

Tens of thousands rallied for five months against what they called Vucic's increasingly authoritarian tilt, ever since the Progressives took power in the country in 2012.

Opposition supporters in Albania battled police almost every weekend in April, May and June in the capital, Tirana, calling for the removal of the Prime Minister, Edi Rama, and his Socialist-led government.

Angry crowds regularly threw stones and smoke bombs at the police and pulled down security fences - while police responded to the crowds with tear gas and water cannons.

The "Odupri se" ["Resist"] movement in Montenegro started in January as an initiative of civic activists, university professors, and journalists, after a video clip showed Dusko Knezevic, chairman of the Montenegro-based Atlas Group, appearing to hand the then mayor of Podgorica, Slavoljub Stijepovic, an envelope containing 100,000 US dollars to fund the ruling Democratic Party of Socialists' election campaign.

Supported by the main opposition parties, several thousand people protested across the country for three months demanding the resignation of President Milo Djukanovic and the chief prosecutor for organised...