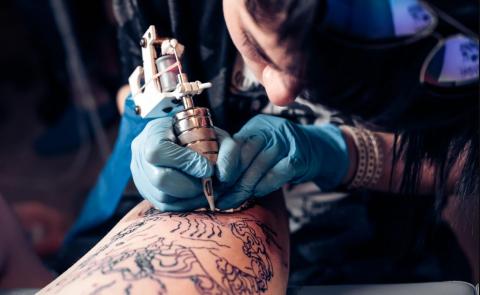 Some 20 percent of teenagers get their first tattoo under the age of 18, a survey conducted by two dermatologists has shown. Experts warn about health consequences caused by unlicensed tattoo shops.

"We see very often adolescents having henna powder ink under the name of temporary tattoo. It causes sensitivity to allergens at early ages. Those kids then have to live with allergy for their lifetime," said Mehmet Salih Gürel, a dermatologist from Medeniyet University hospital in Istanbul.

Some materials included in henna powder, such as para-phenylenediamine, are banned in many European countries, he added.

Gürel and his colleague Melek Aslan Kayıran have conducted a survey among 144 patients who have applied to the hospital.

"The most important point is that the rate of those getting a tattoo under the age of 18 is higher in Turkey than other countries," said Kayıran.

The mentioned rate is around 5 percent in the United States and 11 percent in Europe, according to the research, whereas it is estimated at 20 percent in Turkey.

"Most of the participants in our survey had just entered a tattoo shop on a street to get inked. Apparently, they do not think about the hygienic conditions in those places," Kayıran said.

Tattoo artist Ahmet Güngör, who has been running a shop for 14 years, said that there are many unlicensed tattoo shops in big cities.

"There are a lot of underground tattoo places. For instance, we do not ink tattoos on a person under the age of 18, even if a parent gives permission. But there are many places doing so and which publicize these on the internet," he said.