EU to explore further enlargement in 2020 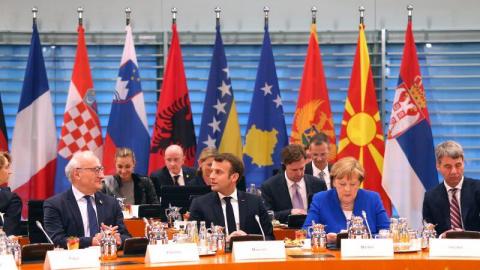 Croatia, the youngest EU member, vowed to advocate for the bloc's Balkan enlargement, and pledged to work for "a strong Europe in a world of challenges" in the upcoming six months, after taking over the European Council's rotating presidency on Jan. 1.

Members of the Croatian government will chair the reunions of the EU's main decision-making body in Brussels and hold over 1,400 meetings at various levels in Croatia during the country's presidency in the first half of 2020.
It will be the first time that the country, which joined the EU in 2013, assumes the task.

The Croatian chairmanship promises to concentrate its work on four main domains -- including "influential Europe", "developing Europe", "connecting Europe", and "Europe that protects".

The priority of "an influential Europe" is meant to stress the EU's role as a leading international player. The plan includes fighting climate change, strengthening the multilateral trade framework and protecting human rights all over the globe.

This priority also embraces the country's strong commitment to the EU's enlargement policy for the Western Balkans. In May 2020, the EU-Western Balkans Summit will be held in Zagreb and the Croatian presidency hopes to relaunch the stalled process by the end of its term.

In October's summit, EU leaders failed to give the green light for starting the accession negotiations with Albania and North Macedonia due to strong opposition of France.
Based on recommendations of Paris, the accession procedure might be reviewed in the first months of the year so that accession talks could begin with the two countries.

Accelerating the ongoing negotiations with Serbia and bringing Bosnia-Herzegovina closer to accession make also part of the...

Fake Mona Lisa up for sale by Christie’s