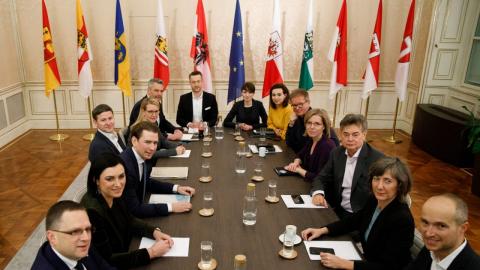 A Bosnian-born woman who came to Austria as a child refugee will be Austria's new Justice Minister, it was confirmed on Thursday.

Thirty-five-year-old Alma Zadic, a lawyer and member of the Green Party, will also be the youngest Justice Minister in Austrian history and the first to come from an immigrant background.

The leaders of the centre-right Austrian People's Party, OVP, and the Greens, Sebastian Kurz and Werner Kogler, reached an agreement to form a new coalition government on Wednesday. Under the agreement, Kurz will become Chancellor again and Kogler will be Vice-Chancellor.

Of the 15 ministries, four will belong to the Greens, and one of them will be the Justice Ministry, now headed by Zadic.

The deal is yet to be approved by the Greens, meeting for a congress on Saturday. If the deal passes, the new government could assume power as soon as next week.

Zadic came to Vienna in 1994 at the age of ten as a refugee, escaping from the 1992-5 war in Bosnia and Herzegovina. After studying law in Vienna, she completed her internship at the International Criminal Tribunal for the former Yugoslavia, ICTY, in The Hague.

She gained international experience in law firms in New York and London and graduated from Columbia University. On her return from the US, she worked in Austria as a lawyer for seven years.

She won her first seat in the Austrian parliament in the 2017 elections as a candidate for the Pils list, and became the first MP with a Bosnian migration background. "Bosnia and Herzegovina can count on me," she told the Bosnian media at the time. In the 2019 elections, she ran as a member of the Greens, and was re-elected.

"I left my job as a lawyer and went into politics because I wanted to show that diversity and...