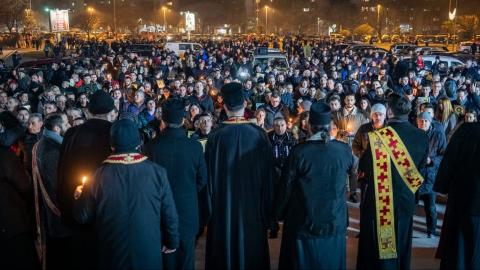 Following mass protests by ethnic Serbs in Montenegro against the recently adopted Law on Religious Freedom, which they say targets the assets of the Serbian Orthodox Church, agitation against the law has spread to neighbouring Serbia.

On Thursday, several thousand fans of the Belgrade sports club Red Star marched to the Montenegrin embassy to support the protests in Montenegro against the law.

Singing "Serbia and Montenegro are family", and "Milo, thief, we won't give you holy places", they launched fireworks at the Montenegrin flag on the building. [The reference to "Milo" was to Montenegrin President Milo Djukanovic.]

Several far-right organisations also joined the rally. Although the event was announced, the embassy was left unguarded by the Serbian police, with only undercover security units present, which sparked sharp criticism from Montenegro.

On Friday, the Montenegrin Foreign Ministry summoned the new Serbian ambassador, Vladimir Bozovic, to protest over the football fans' rally and the attempt to target the flag.

Serbia has a history of violent protests in front of diplomatic missions. In 2008, Serbian nationalists torched the US embassy in Belgrade during a protest against US support for Kosovo's declaration of independence.

During Thursday evening's event, protesters tried to insert one of their banners through the Montenegrin embassy doors, but were prevented by security.

Montenegrin Prime Minister Dusko Markovic in his reaction called the protest an "uncivilized attack", and added that the attitude of...