Some call me a warmonger, others a traitor. Decision on Montenegro within 24-36 hours 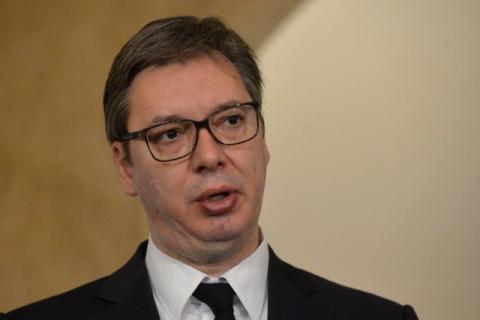 I do not want to be like them, I want us to be good neighbors, Vucic commented on the situation in Montenegro, adding that Kosovo and Metohija are the territory belonging to our country, but Montenegro and Croatia are not and that the integrity of other countries should be respected.
It is my desire and obligation to be with our people in time of trouble, Vucic said, adding that in the next day, day and a half, he would make a final decision on whether to spend Christmas Eve with the Serbs in the north of Montenegro.
"Nothing more than that," was, as he said, his idea.
The greatest Orthodox holiday, he says, is a time for showing forgiveness, reconciliation, a time to show unity as a people, "without insulting or provoking."
He has no plans to make political speeches.
"The bottom line is that we understand that we live in different countries, that we respect those states, but it is important that we belong to the same nation, that we have to show unity. The ideal time to show it is right now", he emphasized.
"In any case, it is my desire and intention to be together with our people when it is hard for them. The President of Serbia's role is not to tour the stadiums, halls, to rejoice in our achievements in sports, and to boast with other people's achievements, but to solve difficult and important problems, to be with our people in times of need", he underlined for TV Pink.
Vucic said he was surprised to see how hysterical campaign was run by numerous media outlets against his arrival to Montenegro.
He recalled that he had also celebrated Christmas at the Zagreb Orthodox Cathedral, as well as in Gracanica.
"It has never been easy for our people in Gracanica and Zagreb. I belong to the Serbian nation and I want...