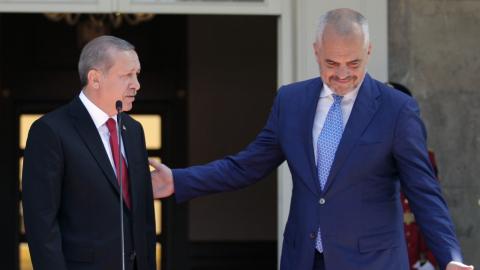 Albania has denied that the Turkish state intelligence agency, the MIT, was involved in the extradition on January 1 of an alleged supporter of the exiled Turkish cleric Fethullah Gulen.

Teacher Harun Celik was arrested in Albania in July 2019 while apparently trying to travel from Kazakhstan to Canada via Tirana on fake documents.

A Turkish pro-government TV station, AHaber TV Channel, said Celik was now in Istanbul Police Station, and would be transferred to court after the paperwork and interrogation are done.

Celik mostly likely faces charges of being a member of a terrorist organisation and of spying against the Turkish state - the usual charges for alleged "Gulenists".

Albania insists that everything was done in line with normal procedures for expelling a foreign national who had attempted to enter the country using fake documentation.

"This person was in prison after border police arrested him at Rinas [international airport] using fake papers. Based on the law, 'On Foreigners', he will be expelled," police spokesperson Gentjan Mullai told BIRN.

Mullai refused to comment on the alleged role of the MIT and said: "an official statement will be released later".

However, Turkish media have hailed the rendition as "a successful operation" carried out by the MIT, a claim that has embarrassed the Albanian authorities, which continue to rebuff claims of foreign involvement.

Tirana has also denied that Celik's forced return to Turkey was a product of the close relationship between Albanian Prime Minister Edi Rama and Turkey's President, Recep Tayyip Erdogan.

"This was a matter of legal procedures, not related to the Prime Minister's office," Endri Fuga, Rama's spokesperson, told BIRN.