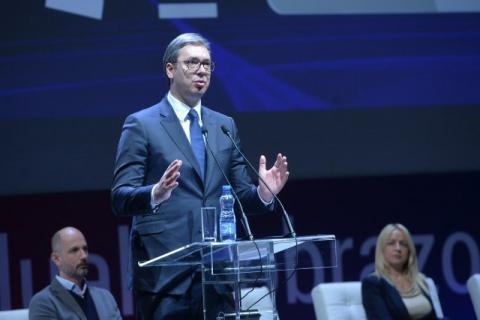 He added that Montenegrin Prime Minister Dusko Markovic had been notoriously untruthful about the event, as well as when he said that Montenegro's independence was threatened.
Vucic also said that Montenegro does not have to protect its independence, because it is not threaten by anyone, but also that it cannot take Serbian holy places.
"We will not threaten your independence, we will not wage war, we will not fight with you. Do not lie to your people that you have been threatened with independence, you are the ones who have endangered shrines that are not yours, which do not belong to the Ministry of Interior or the Government of Montenegro, but to the people and the Serbian church", Vucic said.
Vucic said this in response to a tweet by the Prime Minister of Montenegro, who wrote that "another uncivilized attack on the Embassy of Montenegro and the Montenegrin flag" took place in Belgrade last night, that the relationship between the Serbian authorities was staggering and that Montenegro was facing another challenge of defending its independence and freedom.
"How was it threatened when we were protecting the embassy, what does their ambassador know? That with the flag is not something to be praised and what we can boast about, but how could it not have been a protected embassy? The Montenegrin Prime Minister is telling notorious falsehoods, but doesn't say how much and what they did to the Serbian people and what they do every day", Vucic said.
He emphasized that Markovic's reaction was exaggerated and noted that the idea of the Montenegrin Prime Minister might have been to show Serbia as their only enemy before the next elections, uniting the Montenegrin parties.
"It happened so many times prior to the elections, I regard it...