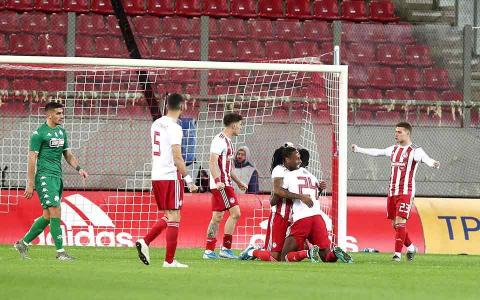 Olympiakos beat Panathinaikos in the Derby of Eternal Rivals on Sunday and climbed to the top of the Super League table at the dawn of 2020, as PAOK succumbed to its first loss after 51 games going down at Aris on Saturday.

In a gripping weekend of action after the Christmas break and the referee strike, the Super League saw Olympiakos return to the top one point ahead of PAOK with its 1-0 win over Panathinaikos.

Playing behind closed doors at the Georgios Karaiskakis Stadium, the Reds were lucky not to concede in the first half as the Greens hit the goal frame, and in the second they got a deserved lead through a Youssef El-Arabi goal that they held on to until the end.

PAOK stayed on 40 points from 17 games after losing the Thessaloniki derby 4-2 to host Aris. The champion led early on thanks to Karol Swiderski, but Aris bounced back to score via Daniel...