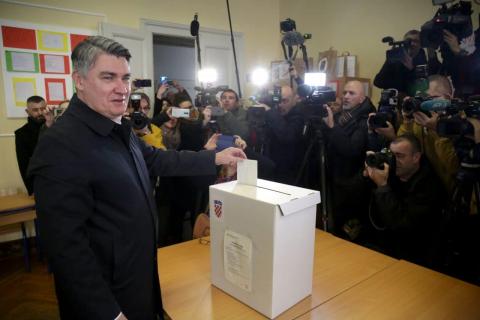 Zoran Milanovic won the second round of the presidential election in Croatia on Sunday, according to preliminary results, after nearly 100 per cent of votes were counted.

"Thanks to everyone who supported me, and to those who did not support me," Milanovic said at his election headquarters, celebrating the victory.

"I know that there are those who don't like me but we have to continue living with that… You will not hear sappy stories from me about unity, but I will do my best not to hurt anybody unnecessarily or intentionally," he continued.

In an emotional speech, Grabar-Kitarovic thanked her voters and congratulated Milanovic on his win. "To some, unity is maybe a shabby word. It is not for me," she said. "I wish success to Milanovic, it is in the interests of our children."

Milanovic became prime minister in 2011. His government was hampered by an economic recession, from which Croatia only started to emerge in 2015. In elections held in November that year, his Social Democrat-led coalition won 56 out of 151 seats, losing to the centre-right coalition led by the Croatian Democratic Union, HDZ, which took 59. The new government was made up of the HDZ and smaller parties.

Grabar-Kitarovic, has been President since February 2015. A former foreign minister, ambassador to the United States and Assistant Secretary-General for Public Diplomacy at NATO, she won the presidential election in January 2015, narrowly defeating the centre-left incumbent, Ivo Josipovic.

Milanovic took the lead in the first round, on December 22,...