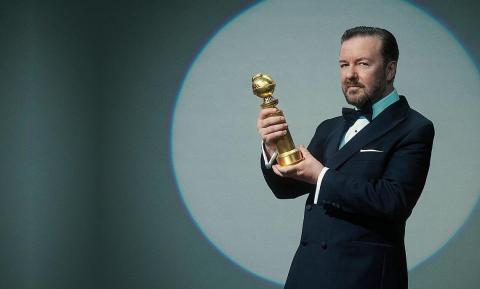 The Golden Globes kick off the Hollywood awards season on Jan. 5, but the most talked-about attraction at the customarily boozy dinner in Beverly Hills may be the wicked tongue of host Ricky Gervais.

Gervais, the no-holds-barred British comedian, returns for a fifth time and is already promising to let the barbs fly.

"Take a drink every time a celebrity looks like they want to punch me in the face," he suggests to viewers in a video promotion for the ceremony.

Whether Hollywood's A-listers and American television audiences will still embrace him four years after his last stint remains to be seen.

"This is a different moment in Hollywood than when Ricky Gervais last hosted the show," said Matthew Belloni, editorial director of the Hollywood Reporter.

"We are in the middle of the #MeToo movement, the push for diversity, the backlash to a lot of the Trump stuff. He is in many ways a throwback host to a time before we had all of these concerns," Belloni said.

Gervais, the creator and star of the British TV comedy "The Office," last hosted the Golden Globes in January 2016 - long before the election and impeachment of President Donald Trump, the sexual misconduct scandal that has roiled the entertainment industry, and the #OscarsSoWhite controversies.

"It's live, so anything can happen. The stars are there. I will insult them, if that's what you like," Gervais said in the video ahead of the show.