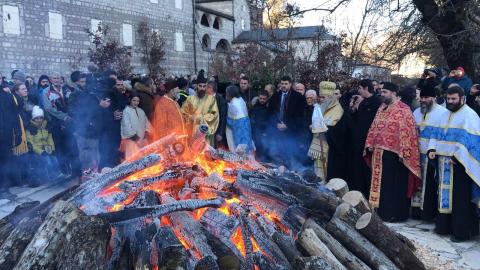 As Orthodox Christians celebrated Christmas Eve on Monday, tens of thousands of Serbian Orthodox priests, bishops and believers attended services and burned traditional Yule logs in the old capital of Cetinje and the current capital Podgorica.

Christmas services routinely highlight the rivalry in Montenegro between the Serbian Orthodox Church and its much smaller canonically unrecognised Montenegrin counterpart.

But this year's event has brought heightened divisions as mass protests continue over the recently adopted law on freedom of religion, which critics say is intended to target the assets of the Serbian Orthodox Church.

Speaking at the liturgy held at the Church of Christ's Resurrection in Podgorica, the Serbian Orthodox Church's top bishop in Montenegro, Amfilohije Radovic, said that the people of Montenegro "felt the bad intention of this law," adding that "no political party or power can stop this fire from God's people."

The Council of Serbian Orthodox bishops in Montenegro announced a three-day break in demonstrations over Christmas, after which they propose holding peaceful walks and processions twice a week in towns and cities until the law is withdrawn.

Keen to avoid accusations of fomenting violence, they said on Monday: "As long as the protests continue, their messages must remain unburdened by any politicisation and any form of nationalism. In light of the joyous Christmas holiday and the numerous national gatherings before Montenegrin churches, we call on the faithful to persevere in their peaceful and prayerful protests."

Followers of the two rival Orthodox churches meanwhile gathered to light Yule Logs in separate places in towns across Montenegro.