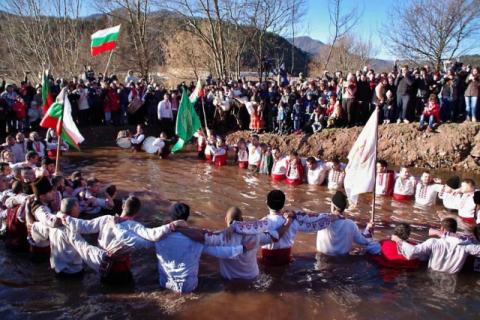 On 6th of January every year, Bulgaria marks St. Jordan's Day (Epiphany). It falls on the twelfth day after Christmas and marks the day Jesus was baptised in the Jordan River by John the Baptist,reports BNT.

As the story goes, during the baptising ritual, the sky opened and the Holy Spirit appeared in the form of a dove and named Jesus the son of God. Because of this event, the holiday has been called Epiphany.

In Bulgarian folklore, the night of 5th of January, the sky opens and the prayers of all people are heard. Bulgarians also celebrate the purifying and healing power of water.

The feast has different names in the different regions of the country: Bogoyavlenie ("Manifestation of God"), Krashtenie Gospodne ("Baptism of the Lord") or Yordanovden ("Day of Jordan", referring to the river).

The main ritual on this day is performed early in the morning by a priest who throws a wooden cross into the river, sea or lake. Men dive in the ice-cold water and race to retrieve the cross. It is believed that the man who first takes the cross out of the water will be blessed to be healthy and freed from evil spirits throughout the year. The priest delivers a special blessing to that man and his household.

The ritual is followed by a festive liturgy. The Bulgarian Patriarch Neophyte serves a Great Blessing of Waters Liturgy in St. Alexander Nevsky Cathedral in Sofia.

The ritual lasts longer In the South Bulgarian town of Kalofer. A large group of men and boys go in the icy waters of Tundzha river early in the morning and perform the unique men's dance called "Mazhko horo". In Kalofer it does not matter who catches the cross because as a tradition it goes to the youngest boy who went into the freezing waters of Tundzha river.

UN aid to Syria to continue through two crossings of Turkey, but Akçakale failed