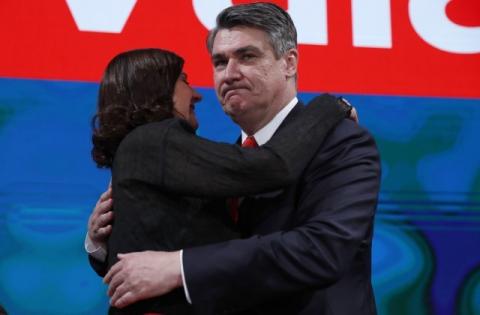 He defeated incumbent President Colinda Grabar Kitarovic in the second round of the presidential election by more than 105,000 votes.
After 99.85 percent of polling stations processed, the former prime minister won 52.70 percent or 1,031,204 votes, while Grabar Kitarovic won 47.30 percent and 925,764 votes, respectively.
"Victory - as I promised," Milanovic told the crowd at his headquarters.
Milanovic won in nine counties and in four largest cities in Croatia, and Kolinda Grabar Kitarovic in 12 counties, as well as in the diaspora.
Zoran Milanovic, 54, the new president of Croatia and former prime minister, returned to politics after a nearly four-year hiatus during which he worked for a consulting firm he founded after the then National Coalition, which he headed, was defeated in the 2016 election.
Milanovic's rise to the political ladder began in April 2007, after the death of Social Democratic Party leader Ivica Racan, when he was elected his successor in the party elections.
He also served as SDP's MP while the party was in opposition.
After the victory of the so-called Kukuriku ('cock-a-doodle-doo') Coalition in 2011, Milanovic became Prime Minister, his term marked the entry of Croatia into the European Union, but also the continuation of the economic crisis, as well as the impoverishment of the widest sections of the population.
After the elections held in the fall of 2015, his coalition was left without an absolute majority, and after unsuccessful attempts to form a government with the then newly formed Most Independent List Party, he resigned as party president and resigned from parliament.
He then founded the consulting firm EuroAlba Advisory, and at the outset of his firm, he discovered that he had...