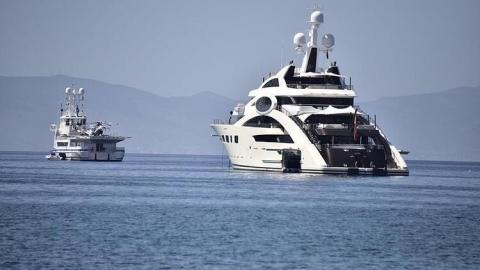 Yacht builders, located in the Antalya Free Zone, have collected a total of $1.2 billion since the early 2000s, Zeki Gürses, the general manager of Antalya Free Trade Zone Operator (ASBAŞ), has said.

"Turkey is the third largest yacht builder in the world, after Italy and the Netherlands. As far as Turkey is concerned, the Antalya Free Trade Zone is the main hub for yacht building followed by Istanbul's Tuzla district and Bodrum in the Muğla province," Gürses noted.

Forty-eight companies operating in the zone have delivered a total of 441 luxury yachts and boats over the past two decades, according to Gürses.

In 2019 alone, 47 super yachts with total length of 802 meters were put to sea at the Antalya Free Zone, generating $95 million in revenues for the shipyards.

Those yachts produced in Antalya last year were sold to the Netherlands, the U.S, Qatar, Croatia, the Ivory Coast, Portugal, Jamaica, Russia, Oman and Djibouti.

"Among the deliveries made in 2019 is the 63-meter-long super luxury yacht, which was sold for $40 million to a British businessperson," Gürses said.

According to Gürses, the Antalya Free Zone also has become a center for providing maintenance and repair services for luxury sailing yachts.

To date, a total of 130 yachts were handed over the companies at the free zone for maintaining services and 111 of them were delivered to their owners, he noted.

In 2019, 13 yachts arrived at the free zone to receive maintaining services.

"Ten of those vessels were returned to their owners after their maintenance and repair work was completed,"

An investment to expand the capacity of the...