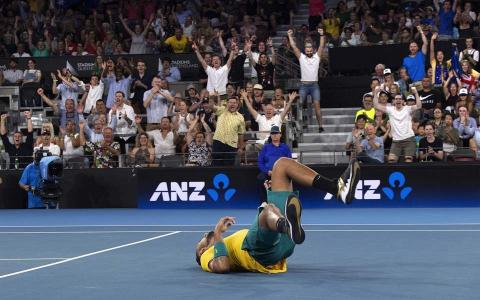 Australian Nick Kyrgios outlasted world number six Stefanos Tsitsipas 7-6(7) 6-7(3) 7-6(5) after an intense duel to seal the tie for the hosts against Greece at the inaugural ATP Cup team event in Brisbane on Tuesday.
Kyrgios slammed a backhand winner on matchpoint and fell on his back to celebrate his second win in as many meetings against the ATP Finals champion as the partisan crowd at the Pat Rafter Arena roared on.
His win ensured Australia will go to the knockouts having won all their ties in the $15 million ATP Cup, which features 24 nations competing in Perth, Brisbane and Sydney over 10 days.
"Exhausting! It was lot of fun. Knew it was going to be a tough match," Kyrgios said in a courtside interview. "He's an amazing player and he's so young. He's going to do some special things in the sport."
Kyrgios had missed the tie against Canada with a back...