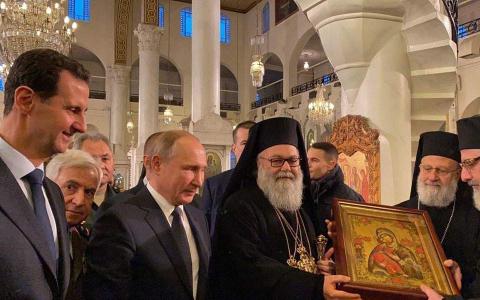 Russian President Vladimir Putin and Syrian President Bashar al-Assad on Tueday visited the Mariamite Cathedral of Damascus, one of the oldest Greek Orthodox churches in the capital, as part of a rare visit to Syria.

The temple, built during the 2nd century AD, also holds the seat of the Greek Orthodox Church of Antioch. The two leaders were accompanied by the Patriarch of Antioch, John X.

Putin's previous trip to Syria was in 2017, when he visited Russia's Hmeymim air base.