Turkish FM in Algeria for talks 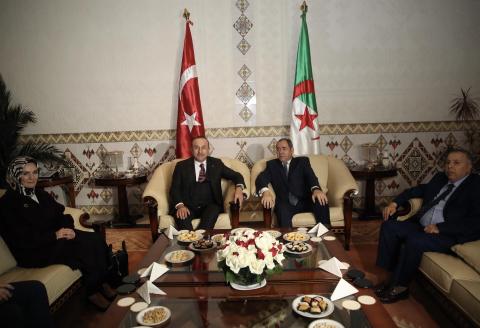 He is to meet Algerian authorities to discuss bilateral ties and recent regional and international developments.

Fayez al-Sarraj, the head of Libya's U.N.-recognized Government of National Accord (GNA) also arrived in Algeria on Jan. 6 for talks.

He met Algerian President Abdelmadjid Tebboune to discuss the situation in Libya.

The Algerian Presidency said in an earlier statement that the meeting "allows the opportunity to exchange views about the situation in Libya and ways to overcome it."

Libyan foreign and interior ministers Taher Siala and Fathi Bashagha, had arrived in Algeria earlier in the day.

Since the ouster of late leader Muammar Gaddafi in 2011, two seats of power have emerged in Libya: one in eastern Libya supported mainly by Egypt and the United Arab Emirates and another in Tripoli, which enjoys UN and international recognition.