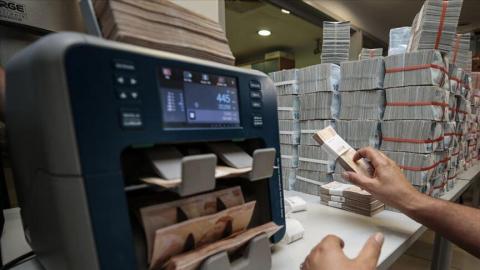 Turkey's banking industry's combined net income was 5.31 billion Turkish Liras (around $900mn) in November 2019, the highest-ever figure on record for this particular month, according to the calculations Anadolu Agency made from the Banking Regulation and Supervision Agency (BDDK).

Local banks' combined profit increased by a sharp 12.9 percent from 4.8 billion liras in the same month of 2018. In November 2017, the Turkish banking sector's total profit stood at around 4 billion liras.

In the first 11 months of 2019, local lenders' combined profit dropped to 46.6 billion liras from 50.66 billion a year earlier, an 8.1 percent decline on an annual basis.

Data from the banking regulator also showed that lenders' total interest income jumped more than 17 percent to amount to 387 billion in January-November compared with the same period of 2018.

The banks' combined interest expenses increased by 22.5 percent on an annual basis to 242 billion liras over the 11-month period. Interests paid to deposits parked at local lenders stood at more than 164 billion, pointing to a 22.4 percent increase on an annual basis.

Elderly not forgotten in Turkey amid pandemic