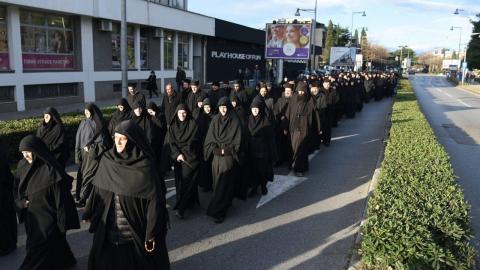 Montenegro's controversial new religion law came into effect on Tuesday, and gives the Property Directorate a year - until January 8, 2021 - to compile a register of all religious sites in the country.

The hotly disputed law, which has ignited mass protests, includes a register of all religious buildings and sites that authorities say were owned by the independent kingdom of Montenegro before it became part of the Serb-dominated Kingdom of Serbs, Croats and Slovenes in 1918, later renamed Yugoslavia.

Under the law, religious communities must provide clear evidence of ownership in order to retain their properties, a provision that the Serbian Orthodox Church - the largest faith group in the country - says is designed to strip it of its holdings.

Once the register of sacred sites is complete, the Property Directorate may submit requests to register some of these objects as state property, and inform the religious community about that request.

"The religious community can continue to use a particular cultural property even after the registration under state ownership of that property, until the decision of the state body responsible for deciding on the use of those objects and land," the law states.

Protests against the law have been motivated by a fear that the pro-Western government - whose relations with the Serbian Orthodox Church are poor - will use it to dispute the Church's assets and so weaken its influence.

However, some elements in the Church are sounding keen to downplay talk of violent conflict.

The Coordinator of the Serbian Orthodox Church's Legal Council, Velibor Dzomic, on Tuesday said the Church does not see itself as above the legal order in Montenegro, and merely wants a dialogue about the law re-opened.