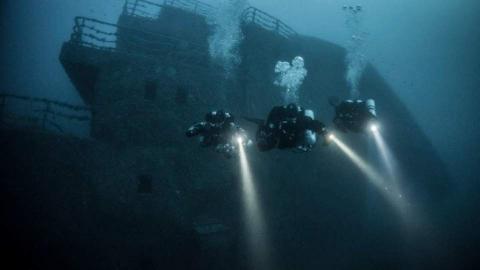 The Greek Navy completed the first phase of a diving exhibition to examine and record the current state of historic shipwrecks in the seas of Skaramanga, Saronic Gulf and Lakki, Leros, the Hellenic Navy General Staff (HNGS) said in a statement Wednesday.

The sunken ships include the legendary brig "Aris" owned by Anastasios Tsamados, which participated in Greece's 1821 War of Independence and later served as a training ship until it was ceremonially sunk with full honours off Salamis, on the 100th anniversary of the Greek Revolution.
The other ships were the destroyers "Hydra" and "Vasilissa Olga".
The first phase of diving was conducted from early September until mid-November, with a second phase to follow in 2020 in collaboration with the underwater antiquities ephorate, during which divers will bring up some of the finds that are historically verified from the...

State primary deficit down by 4.6 billion euros compared to forecast