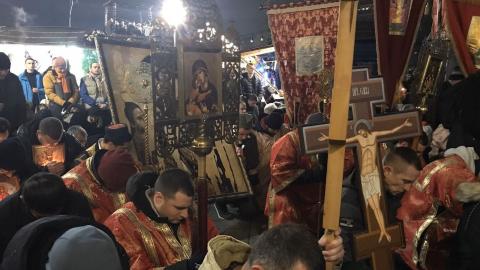 Under the slogan "We won't give up holy places", Serbian Orthodox clergy, right-wing and conservative movements and other citizens marched on Wednesday from the centre of Belgrade to the largest church in the city, the St Sava Church.

During the walk, described as a prayer gathering, traffic in the city centre and the main streets was closed, while the police secured the event.

This was the third time people have taken to the streets in Belgrade against the new law on religion, which Montenegro's parliament adopted on December 27, despite fierce objections from the Serbian Church, its supporters and pro-Serbian opposition parties.

Critics of the law, which mandates the formation of a register of all religious sites in the country, say it is designed to dispute - and rob - the Serbian Church of its assets.

During two previous gatherings which mainly drew right-wing groups and football fans, fireworks were launched at the Montenegrin embassy in Belgrade in an attempt to torch the Montenegrin flag, drawing strong condemnation from Podgorica.

Amid continuing tensions, Serbian President Aleksandar Vucic cancelled an announced visit to Montenegro on January 6, where he had planned to attend Orthodox Christmas ceremonies together with local Serbs.

"I made that decision because I'm sure there would have been conflict," Vucic told a press conference on January 4, accusing the Montenegrin authorities of using his visit to portray it as an attack on the independence and the constitutional order of this country.

"With the Law on Freedom of Religion, the authorities in Montenegro want to weaken [Montenegro's] awareness...