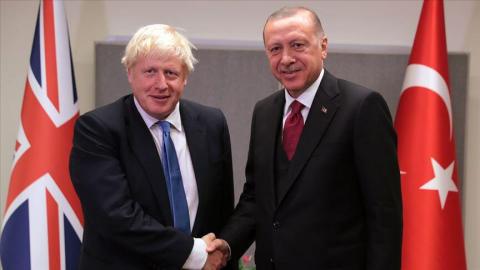 President Recep Tayyip Erdoğan and Prime Minister Boris Johnson spoke about the current tension between the U.S. and Iran and other regional and international issues, particularly Libya and Syria.

The U.S. killing last week of Qasem Soleimani, the head of Iran's Revolutionary Guards' elite Quds Force, marked a dramatic escalation in tensions between the countries, which rose after U.S. President Donald Trump chose in 2018 to unilaterally withdraw Washington from a 2015 nuclear pact world powers struck with Tehran.

Also last week Turkey's parliament passed a motion allowing it to send troops as military aid to Libya's U.N.-recognized Government of National Accord (GNA), which has been besieged by forces of Khalifa Haftar, a warlord based in eastern Libya.

Since the ouster of late leader Muammar Gaddafi in 2011, two seats of power have emerged in Libya: one in eastern Libya supported mainly by Egypt and the United Arab Emirates and the other in Tripoli, which enjoys U.N. and international recognition.

In Syria, continued Assad regime and Russian attacks on Idlib, northwestern Syria, are sending more refugees towards the border with Turkey, which currently hosts some 3.6 million Syrian refugees, more than any other country in the world.