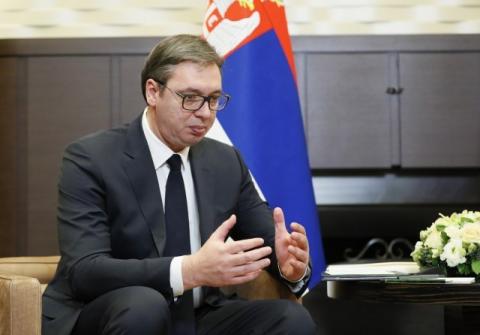 Vucic added that "few world statesmen" called Serbia and Serbs "a handful of misery", as the newly elected Croatian President Zoran Milanovic once did.
Asked what he expects in relations between Serbia and Croatia, Vucic said that Serbia would be delighted to welcome any improvement in relations towards the Serbs in Croatia.
"We will welcome every kilometer of asphalt or power lines that Croatia builds in Serbian areas", Vucic said in Istanbul.
He stressed that Serbia is very open to co-operation with Croatia and that it is necessary if both countries want to survive in these areas, including stoping the large outflow of people, which, as he says, is proportionally larger in Croatia.
"Cooperation is the key word, and will we succeed", Vucic said, adding that few world statesmen called Serbia and the Serbian people "a handful of misery," but nonetheless congratulated Milanovic on winning the election. (Milanovic recently was quoted saying: "Serbs want to be rulers of the Balkans, but are actually a handful of misery").
"I want to believe that it was said at some point when ... I'm not sure what happened. In any case, we will essentially have to establish better relations with Croatia and Croats", Vucic said.

Visits to the Clinical Center of Serbia banned