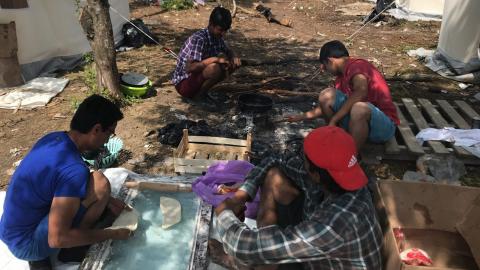 More than 90 per cent of judgments were pronounced on the basis of plea agreements. Sanctions ranged from conditional sentences to three years in prison. Ancillary penalties of several dozen thousands euros were also imposed and the proceeds of migrant smuggling worth over 10,000 euros were seized, along with several vehicles used to execute the crimes. Two people were acquitted at first instance.

The situation with thousands of migrants and refugees in Bosnia on their way to the EU remains complex. Most are unable to leave non-EU Bosnia and enter EU-member Croatia, turning them into potential targets for smugglers.

Bosnia has thus become a bottleneck on the so-called Balkan route to Western Europe for migrants and refugees, with more than 60,000 registered temporarily in the country in the past two years.

The precise number of those still in Bosnia is hard to confirm, but is estimated to range between 4,000 and 6,000 - which means that most of those who declared an intention to claim asylum in Bosnia have already left and moved on.

Jasmin Ahic, a professor at the Sarajevo Faculty for Criminalistics, Criminology and Security Studies, said smuggling is planned in stages through certain areas or countries, starting from Greece, via Albania, Montenegro, Serbia or Bosnia and Herzegovina.

Out of 80 people sentenced in Bosnia over the past two years, more than a half received suspended sentences, while fines of up to 5,000 euros were imposed.

In 2019 the longest sentence was pronounced against Pakistani national Usman-Ali Maqsood-Ahmed, who was sentenced to three years in prison and fined 3,400 euros following a guilt admission agreement, for having helped to organise a smuggling operation.