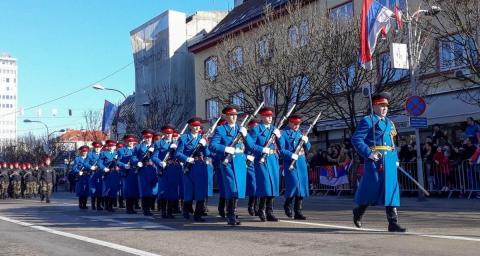 More than 2,400 participants took part on Thursday in celebrating the disputed Day of Republika Srpska, ignoring condemnation from Bosniak leaders and a ban imposed by the country's Constitutional Court.

Despite the court ruling that the holiday was unconstitutional, and fierce criticism by Bosniaks and part of the international community, authorities in Bosnia's mainly Serb entity went ahead with festivities and an awards ceremony.

More than 2,400 police officers, prison guards, firefighters, civil protection force members and Russian bikers from the pro-Kremlin Russian motorcycle club, the Night Wolves, paraded through the streets of Banja Luka, the administrative centre of Republika Srpska, festooned with thousands of Serbian red-blue-and-white flags and billboards proclaiming: "For all times."

The decorations have been in place for weeks, overshadowing those put up for New Year's Eve.

"Many difficult times were behind us, many challenges, but we have withstood all the bumps. They predicted that we would disappear, be erased and would not endure the battle - but we endured everything," the Republika Srpska President, Zeljka Cvijanovic, said dramatically at the parade.

The show of defiance over the holiday is widely seen as part of an attempt by Milorad Dodik, the former Republika Srpska president and now Serb member of the Bosnian presidency, to test the will of Bosnia's weak central authorities.

Dodik on Wednesday said Serbs have many reasons to be proud of Republika Srpska, whose most difficult times, he added, were now behind it.

"We Serbs in this area in Republika Srpska… know that there is no freedom for the Serbian people if they do not have a...