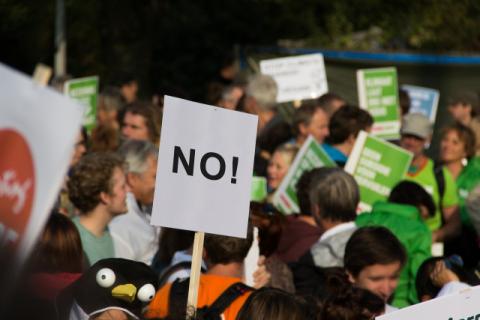 Protesters took to the streets of New Delhi and several major cities, responding to a call for a strike by 10 workers' unions. They directed public anger at the recent privatization of public companies and natural resources in the country and demanded an increase in the minimum wage and pensions.

Farmers and students have participated in some of the protests called for by the 10 trade unions, which have more than 250 million members.

Bus and train services and state-owned banks have borne the brunt of the national strike, which took place despite government warnings of "consequences" for everyone involved. Some of the workers at state-owned oil and coal companies also joined the strike.

Police say more than 150 people have been arrested.

The protesters chanted slogans against the new government's Citizenship (Amendment) Bill, which opponents claimed was anti-Muslim and sparked protests and demonstrations. More than 25 people have been killed in the December 11 protests. The increasing unrest in universities has led to intense social tensions.

Unions have said hundreds of thousands of workers will lose their jobs if the government continues to sell state-owned...