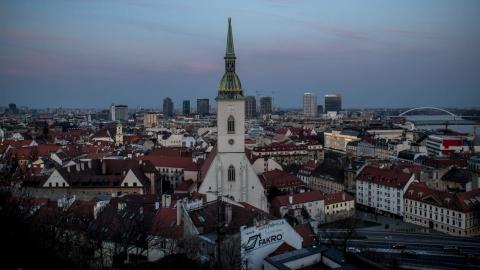 Analysts and commentators couch this election as nothing less than a fight for the democratic future of Slovakia. Voters will decide if they want the country to be more like illiberal democracies in neighbouring Poland and Hungary or stay on a steady pro-European course.

"This is a fight for the character of the state," Viera Zuborova, a political analyst at the Bratislava Policy Institute think tank, told BIRN.

Peter Bardy, editor-in-chief of investigative news site Aktuality.sk, said the election will reveal the true face of Slovakia three decades after the fall of communism.

"We will show if the values of freedom and democracy survived after November 1989," he wrote in a recent commentary.

The populist ruling coalition of SMER-SD, the Slovak National Party and Most-Hid has already tried to tilt the election race by changing campaign financing rules at the expense of new parties and by extending the moratorium period for pre-election opinion polls from 14 to 50 days.

After intervention by President Caputova, the Constitutional Court rendered the moratorium law ineffective until judges have the time to make a verdict on its constitutionality.

In the most recent polls, the SMER-SD party of former Prime Minister Robert Fico leads with support of around 20 per cent, followed by proto-fascist Kotleba's People's Party - Our Slovakia and the liberal-centrist PS/SPOLU coalition.

Although SMER-SD representatives have repeatedly ruled out any collaboration with extremists, experts and opposition politicians fear the ruling party could...