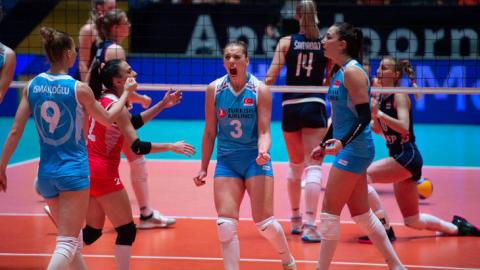 Turkey's national women volleyball team will take on Belgium for their last group match in the European qualifiers for the 2020 Tokyo Olympics on Jan. 10.

Turkey were beaten by Germany 3-1 in their first game of the European qualifiers on Tuesday while they beat Croatia 3-1 in their second game on Wednesday in the tournament.

Following second their games, Turkey currently sit in second spot in Pool B as Germany top the group with two wins.

Belgium and Croatia are in third and fourth place, they will play against each other in their second match in Pool B on Jan. 9.

Turkey's last Pool B game against Belgium will kick off in the Dutch city of Apeldoorn at 15:30GMT on Jan. 10.

The Netherlands, Bulgaria, Poland and Azerbaijan in the Pool A are also competing for the 2020 Olympic Games in Tokyo.

The best two nations in each pool will qualify for the semi-finals in the European qualifiers.

The winner-takes-all final is set for Jan. 12.

The winner will secure a place in the 2020 Olympic Games scheduled between July 24 - Aug. 9.