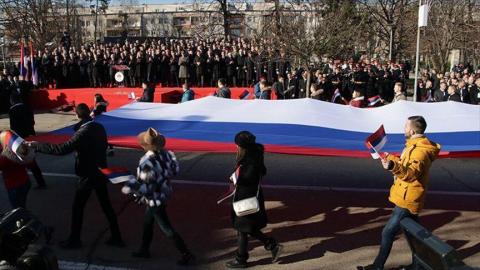 Bosnian Serbs on Jan. 9 held celebrations to mark the anniversary of the founding of the small entity -- Republika Srpska -- in defiance of Bosnia's top court ruling.

A parade in northern Banja Luka city -- de facto capital of the entity -- started the celebrations, which was supported by the senior members of the Republika Srpska government.

The city was decorated with Republika Srpska flags. Some 1,000 police officers were on duty for security during the ceremony.

Among the attendants were Serbian Prime Minister Ana Brnabic together and ministers from her Cabinet.

Also, a ceremony was held this morning with the participation of Patriarch Irinej of the Serbian Orthodox Church.

At the ceremony, Milorad Dodik, Serb member of the Presidency of Bosnia and Herzegovina, described Republika Srpska as a "state".

Bosniak member of the Presidency Sefik Dzaferovic said that the constitutional order of Bosnia and Herzegovina was hit on Jan. 9, 1992 and the genocide during the war in Bosnia was actually a result of that.

Dzaferovic emphasized that Jan. 9 is not Republika Srpska Day, and the celebrations are against the constitution and the law.

Bosnian Serbs consider Jan. 9 to be their small state's most important holiday.

However, in late November 2015, Bosnia's Constitutional Court ruled that celebrating Dan Republika Srpska [Republika Srpska Statehood Day] could be discriminatory to other ethnic groups in the country.

The Constitutional Court of Bosnia Herzegovina was...