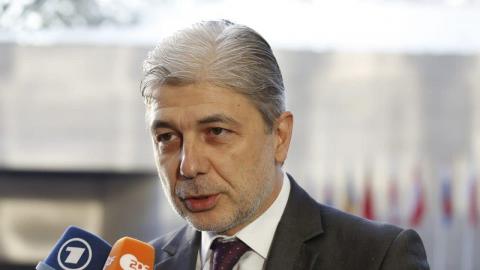 Bulgaria's Minister of Environment and Water, Neno Dimov, has resigned and been charged with deliberate mismanagement of a water crisis. He faces further grilling over a scandal concerning transports of scrap from Italy.

Prime Minister Boyko Borissov accepted his resignation on Friday. Dimov stepped down after being arrested on Thursday.

The town of Pernik, 40 kilometres west of Sofia and home to 82,000 people, has been struggling with its water supply for two months after the local Studena dam dried up, since when the authorities have imposed water restrictions to cope with the crisis.

The minister has been charged with deliberate mismanagement for allowing a continued flow of the water supply, despite repeated warnings that the level of water behind the dam was decreasing.

Meanwhile, reports surfaced in the Italian media in mid-December of irregularities in the paperwork for processing 9,000 tonnes of scrap - mostly plastic, paper and metal - being transported from Italy to a site near the Bulgarian town of Pleven.

The scrap was allowed to enter Bulgaria allegedly without the proper paperwork required for it to be gathered, maintained and destroyed at the site.

Although the two cases are separate, Dimov has been criticised for inaction in both.

Following an investigation led by Chief Prosecutor Ivan Geshev, Dimov was taken into custody on Thursday and held for 24 hours. Later, the prosecution said he would be held for another 72 hours, but was not being grilled over the waste issue, which was still being investigated.

The former governor of Pernik district, Irena Sokolova, and the former head of the local water supply, Ivan Vitanov, are also under arrest. Around 30 people are being questioned. The Minister of...