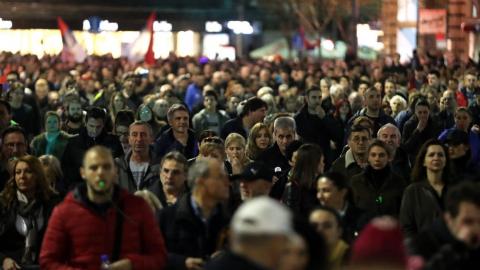 11-12 January - Protests are expected in Poland over new legislation to tighten government control over judges.

13 January - Poland marks the first anniversary of the assassination of Gdansk Mayor Pawel Adamowicz during an annual charity event.

13-15 January - In Slovakia, the trial begins for the murder of investigative journalist Jan Kuciak (continues February 3-6).

26 January - The Hungarian city of Gyor holds a mayoral election following the resignation of the ruling Fidesz party-backed mayor due to a sex scandal.

31 January - The United Kingdom leaves the European Union, with 27 of Britain's 73 seats in the European Parliament reallocated to other countries (Croatia, Poland, Romania and Slovakia each get one). The remaining 46 seats will be frozen for any future EU member states.

A woman walks past a mural depicting the late Oliver Ivanovic in Belgrade, Serbia, 15 January 2019. Oliver Ivanovic was a moderate Kosovo Serb politician killed in a drive-by shooting on 16 January 2018, in front of his office in northern Kosovo. Photo: EPA-EFE/ANDREJ CUKIC