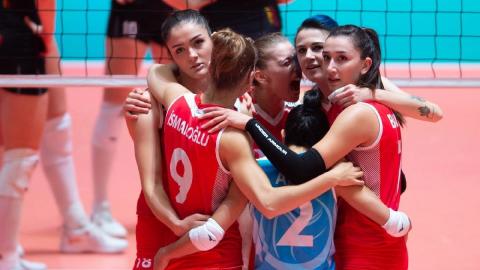 The Turkish women's volleyball team on Jan. 10 won against Belgium 3-2 in a tie-breaker to qualify for the CEV European qualification semifinals for the 2020 Olympic Games.

Turkey led the first two sets 25-20 and 25-15, a great advantage to win the match in Apeldoorn, the Netherlands, but the Belgians managed to equalize, winning the third and fourth sets, 25-20 and 25-22.

The Turkish team were victorious in the tie-breaking set 15-10 to bag the final four ticket in the Tokyo 2020 qualifiers.

The best player of the match was Turkey's opposite Meryem Boz, who scored 26 points at Omnisport.

Turkish middle blocker Eda Erdem Dündar had 5 winning blocks to be the best blocker in the match.

So Pool B ended with Turkey completing the group stage in second place.

Turkey, with two wins but one loss in this phase, qualified for the final four.

Pool B winners Germany have already gone to the semifinals, having won all three games.

Belgium and Croatia have been eliminated from the qualifiers.

Turkey will take on Poland in the semifinals for the 2020 Olympic Games on Jan. 11.

Pool A winners Poland beat Azerbaijan 3-0 in Apeldoorn, Netherlands to meet Pool B runners-up Turkey in the next phase.

The European qualifiers for the Tokyo Games is currently held by Netherlands.

Pool B winners Germany will take on the Netherlands at Omnisport.

The winning team will secure a place in the women's volleyball competition in Tokyo scheduled July 24 to Aug. 9.

The winner-takes-it-all final is set for Jan. 12.