US dismisses Iraq request to work on a troop withdrawal plan 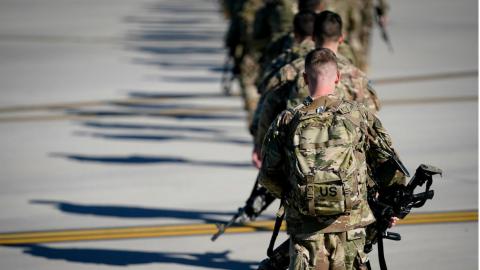 Thousands of anti-government protesters turned out in the capital and southern Iraq, many calling on both Iran and America to leave Iraq, reflecting their anger and frustration over the two rivals — both allies of Baghdad — trading blows on Iraqi soil.

The request from Prime Minister Adel Abdul-Mahdi pointed to his determination to push ahead with demands for U.S. troops to leave Iraq, stoked by the American drone strike on Jan. 3 that killed top Iranian Gen. Qassem Soleimani.
In a phone call on Jan. 9, he told U.S. Secretary of State Mike Pompeo that recent U.S. actions were unacceptable breaches of Iraqi sovereignty and a violation of their security agreements, his office said.

He asked Pompeo to "send delegates to Iraq to prepare a mechanism" to carry out the Iraqi Parliament's resolution on withdrawing foreign troops, according to the statement.

"The prime minister said American forces had entered Iraq and drones are flying in its airspace without permission from Iraqi authorities, and this was a violation of the bilateral agreements," the statement added.

Abdul-Mahdi signaled he was standing by the push for U.S. forces to leave despite signs of de-escalation by Tehran and Washington after Iran retaliated for Soleimani's death by firing missiles that hit two Iraqi bases where American troops are based but caused no casualties.

Iraqis feel furious and helpless at being caught in the middle of the fighting.
Abdul-Mahdi has said he rejects all...