PAOK downs AEK to stay a point behind the Reds 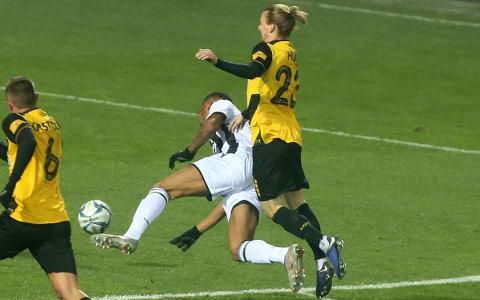 PAOK kept up the chase of Super League leader Olympiakos beating AEK on Sunday in a tightly contested game, after the Reds had comfortably seen off host Lamia.

The champion defeated AEK 1-0 in Thessaloniki thanks to a second-half penalty kick by Adelino Vieirinha, while AEK has some serious complaints from the referee, asking for two penalties. It finished the game reduced to nine men.

Olympiakos stayed one point ahead of PAOK, on 44 points, through a 3-0 win at Lamia. A Youssef El-Arabi hat trick and a Mathieu Valbuena penalty kick forced Lamia's first home loss of the season.

Xanthi beat Volos 3-1 on the road on Saturday to match Aris on fourth, as the Thessaloniki team shared a goalless draw with host Larissa.

Panathinaikos and Atromitos share the sixth spot. The Greens won 3-0 on Sunday at home against struggling Panionios, goals coming from Christos...