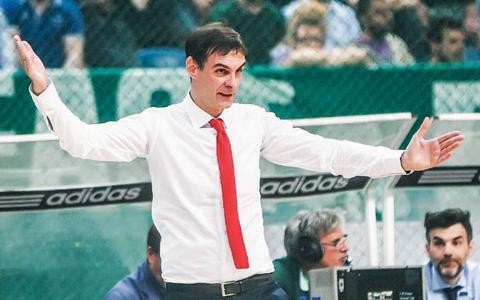 Olympiakos announced on Sunday the return of Giorgos Bartzokas to its bench after the dismissal of caretaking Kestutis Kemzura.

Bartzokas - the first Greek coach ever to win the Euroleague, with Olympiakos in 2013 - was presented by the Olympiakos presidents, Giorgos and Panagiotis Angelopoulos.

"Olympiakos is the club everyone would want to work at. This was not an emotional decision but a professional one," stated Bartzokas, who had the first training session with the Reds on Sunday.

Panathinaikos, Olympiakos's archrival - though this year only in the Euroleague - returned to winning ways in the Basket League trouncing Lavrio 105-74 at home on Sunday.

AEK and Promitheas Patras remain tied in second, as AEK fought off the challenge of Kolossos on Rhodes (79-70) and Promitheas braved a number of injuries to beat Ionikos away (73-69).