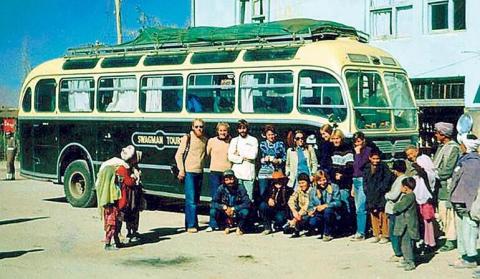 A well-known meeting and communication point for hippies during the 60s and 70s, Istanbul's Lale Restaurant is becoming popular again among ex-hippies who visit the place decades later, sometimes to return borrowed items back.

"Hippies used to sleep on the street or at the nearby park. We were giving directions to them for a city tour. We were giving food for free and they were sending money 5 or 10 years later," restaurant owner Namık Çolpan told daily Milliyet.

"When the Vietnam War ended, they all had professions. Hippies, who called themselves flower children, and members of the 68 generation didn't hanker for money. We always received kindness from them," he added.

Opened in 1957 by the Çolpan family, the restaurant on the hippie trail extending from western countries to Nepal through Afghanistan or Iran was better known as "the pudding shop" of Istanbul.

Pilgrims traveling east, often driving old cars or Volkswagen vans, would stop at this restaurant to meet new acquaintances and find other travelers with whom to share expenses and experiences. It was also a departure point for buses to the Iranian capital Tehran or the Afghan capital Kabul.

Namık Çolpan and his brother İdris put up a bulletin board to handle all the messages from people offering or hitching rides to Europe or the Far East. Travelers were using the telephone cabin of the shop to communicate with their loved ones in their home countries.

Nowadays, they often host those old customers, who this time opt for mobile phones to put photos on social media instead of taking pictures with photographic film cameras.

"A German hippie had stolen a salt cellar from us, because they were sleeping rough and eating cucumbers and tomatoes all the time. When he...