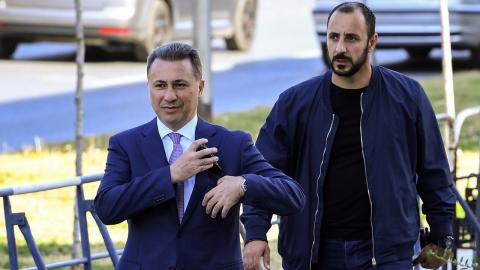 Stavrev scheduled a new start for the trial on Tuesday, warning defence lawyers not to try to stall the case any further.

In a press release, the Skopje Criminal Court, where the trial is taking place, said its previous stated concerns "about possible pressures and threats as well as attempts to stall the procedure" had now come to pass.

The resignation came as a surprise to the court, which was trying to wrap up the case before jury judge Ivanovska Kockovska retired.

While she met the criteria for a pension at the end of December 2019, the court still thought it had time to finish the case, which was nearing its end, before January 27, when the Judicial Council, the governing body of judges, was due to decide on her retirement.

During December and into January, the trial of Gruevski, being held in absentia, together with six other defendants, had seen much tension both in and outside the courtroom.

In December, the defence lawyers insisted that the trial should stop because the jury member was retiring. Meanwhile on several occasions, they or their clients failed to appear at scheduled court sessions, citing various excuses.

In January, some of the defence lawyers then demanded the immediate retirement of the jury member, warning both the jury member and the Judicial Council that they risked breaking the law.

The court responded by saying it suspected that these acts by the defence were a form of pressure against them, designed to stall the whole process.