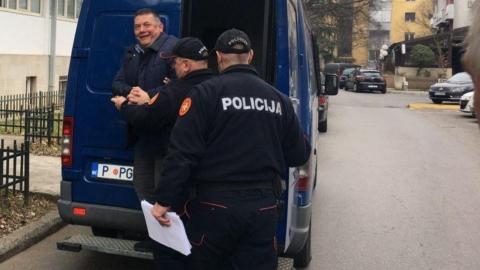 Police in Montenegro arrested the editors of two local news websites, IN4S and Borba, on suspicion of causing panic and public disorder in connection with reports of an explosion.

The Police Directorate on Sunday said Gojko Raicevic and Drazen Zivkovic had been arrested because they released information about an explosion at the Gorica state villa without checking the facts. Raicevic was later released while Zivkovic is being questioned in the prosecutor's office.

"The state prosecutor has pleaded that there were elements of the crime of causing panic and disorder, and asked that they be arrested," the police clarified.

IN4S and Borba both reported on Sunday that an explosion had occurred at the villa, which is used for official receptions, and that the security services suspected an attempted diversion.

In the meantime, some regional media also transmitted the information. The police later denied the report and said a minor failure of the electrical installations had occurred, which was soon repaired.

After his release, Raicevic said he had double-checked the information before it was published and that his arrest was really about intimidating journalists.

"It is clear to everyone that I was next after the arrest of the journalist Andela Djikanovic. I do not know who inspired the action by the police or prosecution. I think it will be known in the next few days, Raicevic said on Monday.

Journalists associations demanded that both Raicevic and Zivkovic be released and warned of violations of media freedom. The Centre for Investigative Reporting, CIN, said arrests of journalists were designed to limit human rights and freedoms and create a sense of legal uncertainty.

"The biggest producer of fake news in Montenegro is...