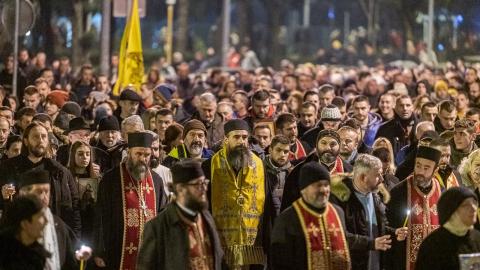 Tens of thousands supporters of the Serbian Orthodox Church, led by priests, staged renewed protests across Montenegro on Sunday evening to voice their opposition to the country's controversial new law on religion.

After the protest march in Podgorica, Metodije, the bishop of Dioklija said that protests would not stop until the law is withdrawn, and said that the Serbian Orthodox Church wants talks with the Montenegrin authorities.

Montenegro's controversial new law on religion came into effect on January 8, and gives the country's Property Directorate a year to compile a register of all religious sites in the country.

The hotly-disputed law says the register must include all religious buildings and sites that authorities say were owned by the independent kingdom of Montenegro before it became part of the Serb-dominated Kingdom of Serbs, Croats and Slovenes in 1918, later renamed Yugoslavia.

Under the law, religious communities must provide clear evidence of ownership in order to retain their properties, a provision that the Serbian Orthodox Church - the largest faith group in the country - says is designed to strip it of its holdings. The government denies this.

Since parliament adopted the law on December 27, tens of thousands of Serbian Church believers have protested...