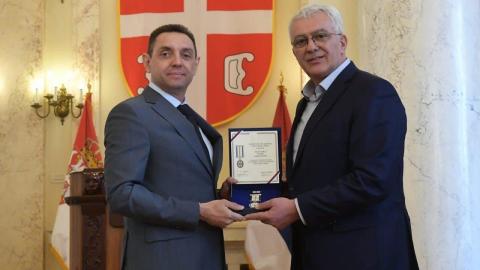 In a gesture seen as provocative towards the Montenegrin government, the Serbian Defence Minister, Aleksandar Vulin, handed a medal on Sunday in Belgrade to a prominent opposition politician in Montenegro who the government considers a coup plotter.

Democratic Front leader Andrija Mandic received a military memorial medal and a sword for defending the then joint state during the NATO bombing of 1999.

Mandic and his party cherish close ties with the Serbian authorities, especially with President Aleksandar Vucic. Both he and other pro-Serbian MPs from Montenegro are regular guests at protocol events and celebrations organised by Vucic.

Vulin told the ceremony on Sunday that Serbia wished to thank those who had helped to defend it during the conflict over Kosovo in the late 1990s.

"Everyone who was with his nation and country in 1999 deserves our respect, and deserves that we are returning it in this way," he said.

He said he also wished to send a message to the Serbian community in Montenegro, "that we know of their existence, are proud of their courage, stubbornness, perseverance and resilience, and that the Serbian people in Montenegro will always be able to count on the state of Serbia".

Mandic is a sharp critic of his own government in Podgorica. Together with his party colleague, Milan Knezevic, he was convicted in a first-instance ruling of involvement in a failed coup in 2016, which the authorities claim originated in Russia.

They have appealed their sentences, claiming the alleged plot was staged to help Montenegro's veteran leader, Milo Djukanovic, win the 2016 elections.

More recently, he was among a group of 18 Democratic Front MPs who were arrested on December 27 in parliament, after they rushed the...