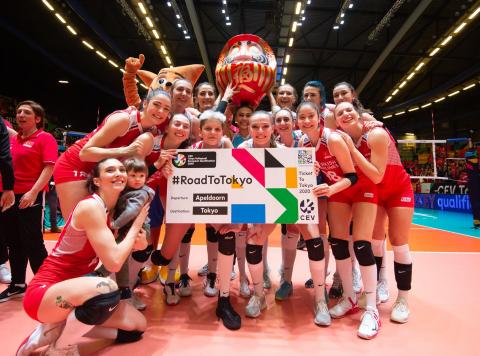 In Jan. 12's grand finale, the Turks delivered a straight-set victory over Germany, symbolizing their right to compete at the Games in the Japanese capital.

Coach Giovanni Guidetti's squad prevailed over Germany in the final of the continental Olympic qualifier in Apeldoorn, mastering a 3-0 (25-17, 25-19, 25-22) victory to book their ticket to Tokyo 2020.

Turkey's Hande Baladin was the highest scorer of the match with 18 points.

"There is one thing that this team does very well," said Turkish captain Eda Erdem Dündar. "We believe in each other. We pass our energy to each other."

Coach Guidetti praised his players and the fans.

"Only a great team made from great players and guided and taken care from a great staff can do what only the 5 percent of the teams in the world can achieve," the Italian coach wrote on Twitter.

"Going to the Olympic Games!!!!! Tokyo we are coming :)!!!! Thank you players and staff! Thank you Turkish supporters," he added.

"This is the most difficult tournament in the World," he said. "Our team made a rough start, but finished on a high note, and I am very happy. I also want to thank the supporters, Apeldoorn was tonight like a small Ankara."

He added that the Turkish women will face a very important test at the Olympic Games.

The only time Turkey appeared at the Olympics was at London 2012 after winning the continental qualification at home in Ankara. At the Games in the British capital, they won two out of five matches, but failed to advance to the quarterfinals.

Iran slams US threat to new commander of Quds Forces

Palestine warns Israel, US over 'deal of century'