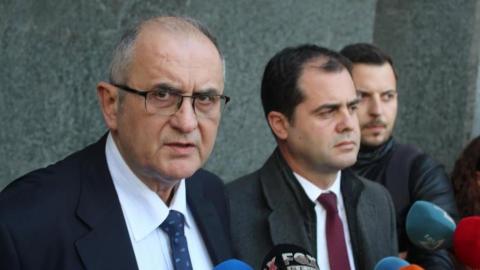 The move has been applauded by the country's US and European partners, and offers a potential boost to the country's chances to open membership negotiations with European Union.

Representatives of the ruling Socialist Party and the opposition Democratic Party and Socialist Movement for Integration signed a statement on Tuesday promising to reach an agreement on electoral reform by the March 15 deadline.

The agreement was signed by Socialist Party MP Damian Gjinkuri, the deputy chairman of the Socialist Movement for Integration, Petrit Vasili, and a representative of the Democratic Party, Oerd Bylykbashi.

"Parties included here promises to address in a consensual way all issues of electoral administration… including recommendations of OSCE/ODIHR," the statement said.

"Parties commit to conclude the reform no later than 15 March 2020," it added.

The agreement signals a potential end to a bitter dispute over election legislation.

The opposition has been claiming that the ruling party collaborates with crime networks to win people's support at elections, and has relinquished its parliamentary mandates and refused to participate in local elections in June 2019 in protest.

The agreement creates a 'political council' to include both the Democratic Party and the Socialist Movement for Integration, which have had no parliamentary representation since giving up their mandates a year ago.

The 'political council' aims to reach an agreement that could pave the way for normal elections in the country after the 2019 local election boycott.

The agreement could also help to encourage a...