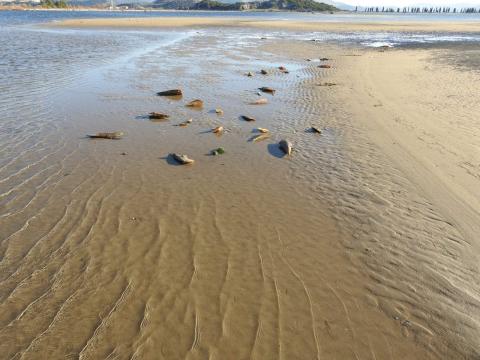 Noble pen shells are dying in large numbers at the mouth of the River Neretva on the Adriatic Sea in southern Croatia because of a parasite, scientists and officials are warning.

"The whole population of noble pen shells in the Mediterranean is extremely threatened by this parasite and the parasite is progressing very quickly," Hrvoje Cizmek, a marine biologist from the Croatian marine explorers' society 20,000 Leagues, told BIRN.

Cizmek warned that the parasite was spreading from the south of the Adriatic to the north.

The alarm was raised by a local ornithological society on January 2 after its members found around 1,000 clusters of dead noble pen shells when visiting the mouth of the River Neretva.

"During the tour, we noticed only one live noble pen shell and three more that were upright, but we are not sure if they were alive as we could not reach them," the Brkata Sjenica ornithological society wrote on Facebook.

Environment and Energy Minister Tomislav Coric confirmed the decline in the area.

"Unfortunately, the Adriatic is not an isolated phenomenon, climate change and global pollution are causing such situations," Coric said on Monday.

The species is the largest endemic shell of the Mediterranean. In Croatia, it is widespread at the sedimentary bottom of shallow Adriatic coastal areas.

The shell is among strictly protected species in Croatia and it is forbidden to pick, catch, dig up or destroy it. Fines are up to 500 kunas (67 euros) per shell.

The International Union for Conservation of Nature, IUCN, has marked noble pen shells as a "critically endangered" species and listed them on the IUCN Red List of Threatened Species. According to the IUCN, the...